"Going virtual has really changed how I think of what hospitality means. I’ve met so many awesome people and had amazing conversations — more personal conversations, even — on Zoom than I ever did behind the bar.”

California native Christian Suzuki — known to his friends as just Suzu — knows his way around a cocktail. Growing up under his grandparents’ guidance at their restaurants in Tokyo, Suzu has managed and tended bar at some of San Francisco’s most iconic spots like 15 Romolo, Benjamin Cooper, Wildhawk, and Tradition.

“Even as a young kid, I was super involved in everything at my grandparent’s restaurant,” he says. “In Japan, understanding temperature preferences is a big deal. Even before I was old enough to tend bar, I had to know who wanted what.”

Back stateside, he took a job as a bartender at Romolo just to pay the bills. “It was like a bootcamp,” he laughs. “That’s where I got my start, and I never left.” He’s known as one of the best of the best, competing in cocktail competitions in London, Seoul, Budapest, and Guadalajara. Named the National Finalist in Most Imaginative Bartender 2020 and Bacardi Legacy 2018, he had big plans for 2020.

That is, until COVID-19 shut down bars and restaurants around the world. He had to figure out how to keep his career thriving.

“It was such a challenge,” he says. “I have a pretty gnarly fear of public speaking. Even with the competitions, just being on stage in front of hundreds of people mixing cocktails was so nerve-wracking.”

He started working with Marco in September to try out this whole virtual-thing. “Going to virtual where everyone would be looking at you, and you’re the focus...that was so challenging,” he says. “Changing gears from a hospitality environment and a bar environment to virtual was total culture shock.”

For Suzu, virtual experiences represent a new form of hospitality. “I don’t think my grandparents would have called this hospitality,” he says with a big smile. “But going virtual has really changed how I think of what hospitality means. I’ve met so many awesome people and had amazing conversations — more personal conversations, even — on Zoom than I ever did behind the bar.”

Getting to know the people he’s teaching makes all the difference. “Bars get crowded,” he says. “And so if it’s super crowded, people would just go to another bar. Now, with these classes, I get to have a personal connection. Plus, everyone gets their cocktail at the same time.”

He starts most folks off with a classic sour, to learn the basics of balancing flavor profiles and understand their palate, which varies wildly person to person. When he teaches a class, his goal is to break down the barriers between traditional cocktails and regular cooks. “A lot of times bartending can seem pretentious or unapproachable,” he says. “But it’s supposed to be fun. My job is to create an environment where everyone can relax, take their mind off of work. That’s why people go to bars to begin with.”

Now, he’s a total pro, crossing his 500th virtual experiences this past month. 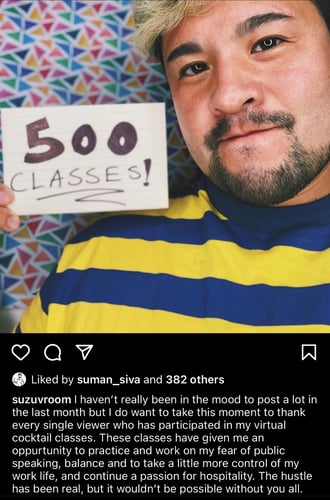 “I never would have thought I could do this,” he says. “2020 was actually one of my most successful years as a bartender, which is so unexpected. I couldn’t be more grateful.”

He’s hopeful that he can use this experience to open a bar of his own in the future, just like his grandmother did. “My grandma’s story is such a huge inspiration to me,” he says. “She opened a bar back in the 1950s in Tokyo and she was the sole owner and operator. Back then, you didn’t even see women in bars, let alone own them. She didn’t care at all, she just wanted to do her thing.”

Through Marco’s interactive platform, Suzu runs two types of experiences: an in-depth mixology course and a more relaxed happy hour. “Everyone at Marco is not only dope to work with, but just so patient with me,” he says. “I’m an analog kind of person. Being virtual is totally outside of my comfort zone, but they’ve been with me every step of the way.”

Learn how to make cocktails with Suzu

Want to meet Suzu yourself? Learn how to whip up an exceptional apéritif at home with ingredients delivered to you. Sign up.

The Future of Culture in your Inbox